“These light box sculptures began as a quest for immersing myself in refractory light, preferably with colorful augmentation. I was interested in engaging the eye with flashing fragments of light and color. This urge speaks partly to the desire for stimulation and novelty, partly to the desire for beauty and eye-pleasing sensory experience, and partly to the need to make something more interesting than that which emits from pixels produced by my television.

My experiments engage the eye in a primal way that speaks to that which makes us human, and that which provides the impetus to produce culture in the first place. I notice that my cat, Chai, has inspected the boxes and sees something, I surmise, resembling the flash of insects and birds. This may be the very same things that draw our own eyes to gleaming glints of illuminated particles. I also had an idea, still unrealized, that I might show a movie (not my movie, but a commercial venture) on a marble—appropriating the image and repurposing it in a novel way, much as high tech has allowed other artists to do with other mediums. It would not be the same movie, but a projection that allows for a new message to emerge. Consider these light box sculptures as forms of painting with light and preliminary attempts to create narratives on the head of a toy from my childhood, glass marbles.”

“The absence of marbles has created some alarm for me as I discovered that children nowadays do not seem to learn to play with these objects that provided such joy during my own childhood.  I found this to be true when I searched high and low for marbles and had to scour the city to find any evidence of the colorful glass balls—and these came from China. We are doing something wrong if we are no longer teaching marbles and if marble playing is no longer a childhood activity.” 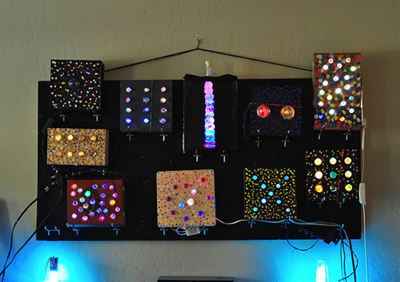