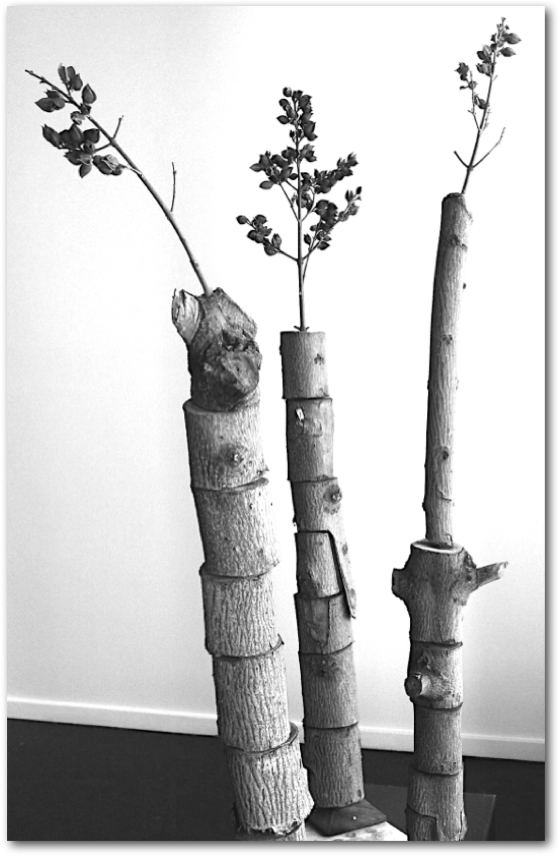 It was suggested by several people that I remove one of the two Polonius trees that I had planted several years ago. The trees had sprung up energetically and achieved heights of 20-25 feet in a remarkably short time. They had become entangled with the electric and phone wires, they had competed with each other and one—the one eventually removed—had largely gravitated towards the neighbor’s property.

Against my better judgment, I removed the tree myself—risking life and limb to do so. At some profound level, I regretted having to end the life of this Polonius tree, a tree originally from China. Who am I to remove its life force from this planet, I asked myself? Under what auspices do I terminate its existence? Despite these pangs of conscience, the tree was taken down and dismantled into convenient green-waste container size.

Then it occurred to me that I might creatively reconstruct the tree and give it an alternate life as an art installation. Arranged, arbitrarily, in three sections, it might act as an agent on behalf of itself, and all nature. It could become a sentinel, a trio of sentinels, speaking to the inhumanity, the brutality of man. It might also give testimony to the arrogance of civilization that operates under the illusion that what resides in our own backyard somehow falls under our right to determine its ultimate fate—that our manifest destiny supersedes the trees own inherent right to life, liberty and, dare I say, happiness.

The tree, deconstructed, seemed to conceptually demand to be a tree. In truth, though, the tree reconstruction has done little to resolve my feelings of remorse.